Capitalism, socialism, communism, libertarian, egalitarian were the first words I decided to do my search on this morning. Besides having a little fun we have agreed some conclusions could be drawn from looking at the highs and lows.  Take for instance libertarian and egalitarian which started to rise slightly in the 50’s and gained momentum thereafter.  We could look at this in terms of first wave feminism or civil rights movement and what the rhetoric was like in literature.

The next search I did included several European dictators and I searched the same names in English, German, Russian and Spanish.  There were some obvious spikes in the charts and some not so obvious.  I hope I don’t offend anyone by posting the dictators, I kept the jpegs small for that one. 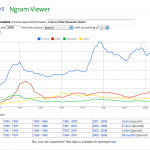 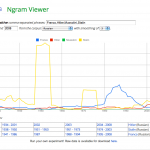 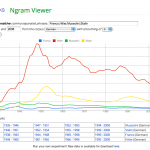 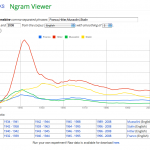