From Trees to Networks

In the second chapter of Lima’s book he talked about how trees have been used to show hierarchy, neatness, and order when in reality nothing is a simply connected as trees portray. He discusses criticisms and alternative formats to trees and the need to show the interweaving traits which are better represented by networks. He cites Guillaume Lecointre and Herve Le Guyader’s book The Tree of Life and their additional views associated with trees: finalism and essentialism. The argument is that trees are static. They do not show change over time, which is eventually what Darwin began to represent with his trees, change over time.

Lima introduces the term Rhizome which was also proposed by Lecointre and Guyader is a way to complicate trees. It connects any point to any other point which allows for intercommunicability. In a way this fuses maps and trees. He argues that this concept has has a major influence on the fields of communication theory, cyberspace theory, complex systems, nonlinear narratives, and hypermedia (44).

He next discusses rhizomatic theory in the context of city planning, mapping the brain, understanding complex dataspheres, ordering nature, and all forms of classification. Each section is another look at his main thesis that in the past we have oversimplified how we categorize information. The emergence of the internet has created an even larger space to experiment with the theory of networks and how they are connected. Computers have opened up a plethora of opportunities to reexamine complex systems such as the brain. He mentions the Blue Brain project being conducted at Ecole Polytechnique Federale de Lausanne (a university in Switzerland) in which a holistic model of the intricate structure of the brain is being mapped. He equates the complexity and greatness of this project to the Human Genome Project.

If we look at the image that I included, which is a map of science constructed by sorting scientific papers into paradigms. The colors circles show which authors were more frequently cited. I’m not sure how well you can see the image but in the book it is almost impossible to have any idea what the subject matter of this picture is without a caption. Even with the caption I was unable to read any of the font or figure out who the authors were that were included. I found this to be the case with a lot of the images in the text. The data seemed inaccessible because of its complexity. This may be a case of trying to put something that works better digitally into print. On a computer I may be able to zoom into the picture to see the names and connections but at least in print, I had no idea what any of the images were really trying to portray other than connections. 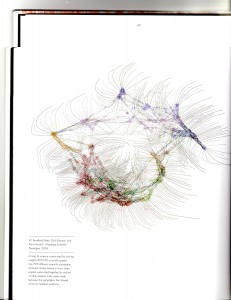 One Response to From Trees to Networks

Need help with the Commons? Visit our
help page Send us a message
Skip to toolbar